The fall in gas prices is something to certainly be happy about, especially since gas is $3 or lower in some American states.   Car sales have increased with consumers buying SUVs and trucks.  Consumers are enjoying the low gas prices  and are taking advantage of their gas guzzling cars.  It's great that oil prices are dropping, but could this cause an increase in greenhouse gas emissions as more gallons are burned?

Sales of many SUV's and pickups shot up in October, as gas prices slid to $3 and below in much of the country.

"Customers were waiting for gas under $3 pull the trigger on large vehicles," said Jesse Toprak, chief analyst for Cars.com.

"Whenever gas prices go down, buyers go out and buy the largest vehicles they can," said Michelle Krebs, analyst with AutoTrader.com.

Even the Hummer H2 saw a jump in sales on the used car market, according to Kelley Blue Book. General Motors (GM) discontinued the line as part of its 2009 bankruptcy.

Meanwhile sales of many small, fuel efficient models, such as the electric Chevrolet Volt, tumbled along with prices at the pump. Sales of the Toyota Prius, the best selling hybrid on the market, fell 13.5% for the month.

However there were some fuel efficient cars with strong sales. Many smaller gas-powered cars, like the Chevrolet Cruze and the Honda Fit, also enjoyed strong sales. 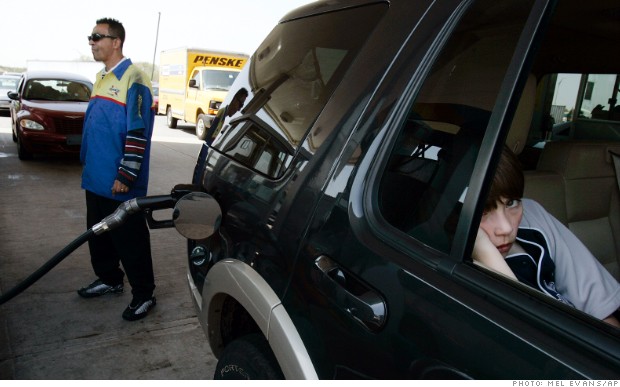